“We have really taken on the community.”

They come from Peter Street, Toote Shop Corner, Brougham Street, Quakoo Street and other neighbouring areas. Some are eager to hear the Bible stories. Many love the fun and camaraderie. For others, their attendance means a sure snack for the day.

Street Reach is a ministry of the Church of God of Prophecy, East Street Tabernacle. It’s a profound social outreach of which the focus and impact reaches beyond the towering presence of the church walls; it reaches into the streets and helps to mold the youth, who live in nearby communities.

On Saturday December 14th, I stepped into the small, white building through Sunlight Village, which is the church’s cafeteria. I took a seat and within a minute, I noticed a little girl in a red dress with big, bright eyes. As she looked back at me, she waved. It was warm, welcoming…sincere.

I later found out she is three-year-old Jennifer Legisse. Jennifer was attending the weekly Saturday meeting with her sisters Linsi and Jalisha.

When questioned what she loves most about Street Reach, seven-year-old Jalisha initially said she loves colouring and creating things. She then added, “They teach us about love, joy, peace.”

At Street Reach that day, there were over 30 children. The room was abuzz as they busily created Christmas cards under the watchful eyes of volunteers. 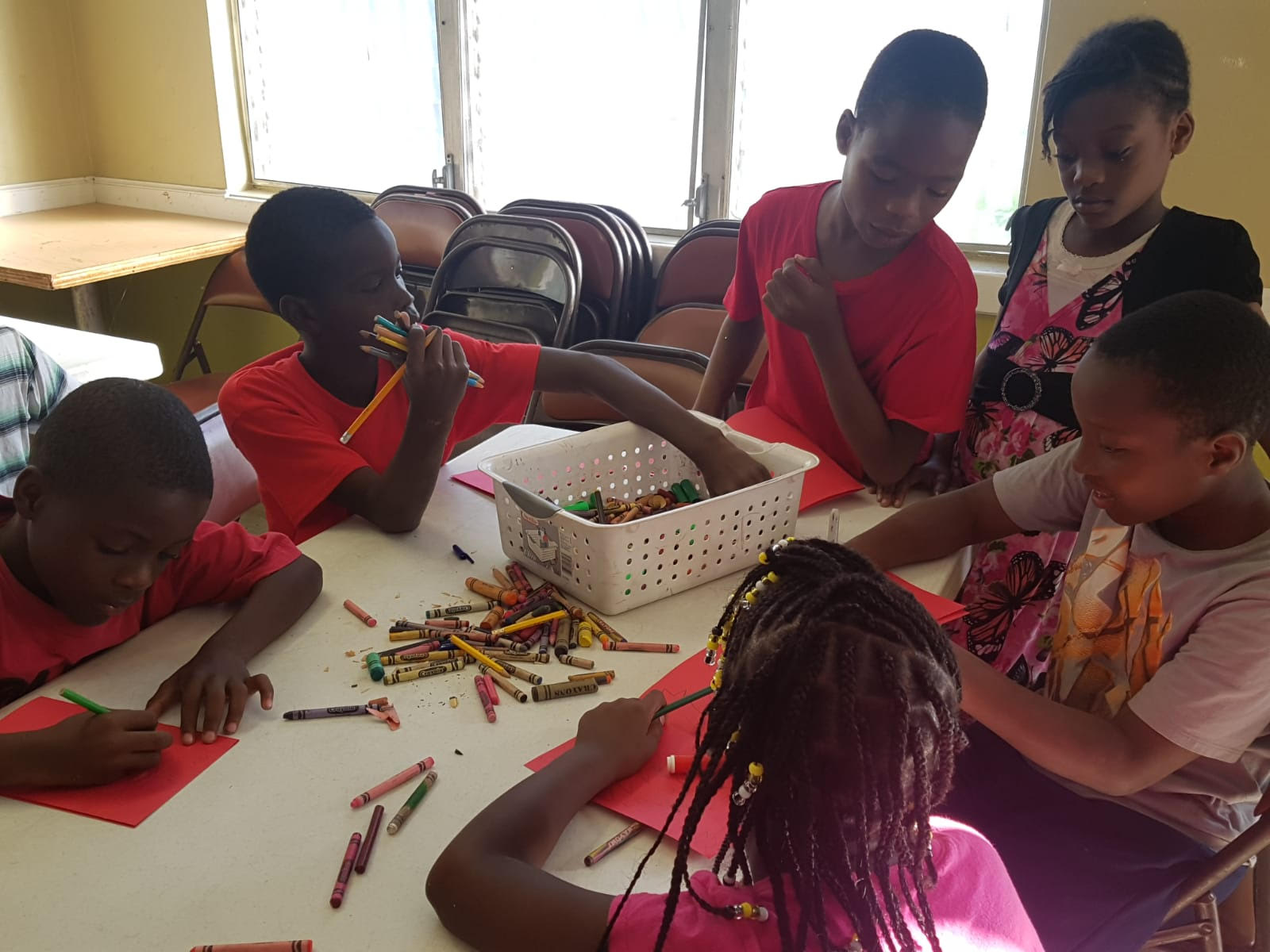 In walked Senior Bishop, Hulan A. Hanna. It was he, who realized upon his appointment to the position in 2014 that there needed to be a connection between the church and the community.

“In prayer and reflection, I realized there was somewhat of a disconnect with this church and the community that led to many persons in this immediate area not coming because it’s a big, imposing  structure with lots of successful people,” said Bishop Hanna.

He noted that the Lord gave him 14 ministry objectives with one being to bridge the gap between the church and community. He was further led by God to ask Brother Philip J. Beneby and his wife Anita to lead the ministry.

“He came back and he suggested we call it Street Reach. We then walked the community, took forms and the response was positive. For three years, we had about 60-80 young people on average each Saturday,” recalled Bishop Hanna.

“Brother Philip and his wife, I can’t begin to properly describe their contributions. It has been phenomenal,” he added. 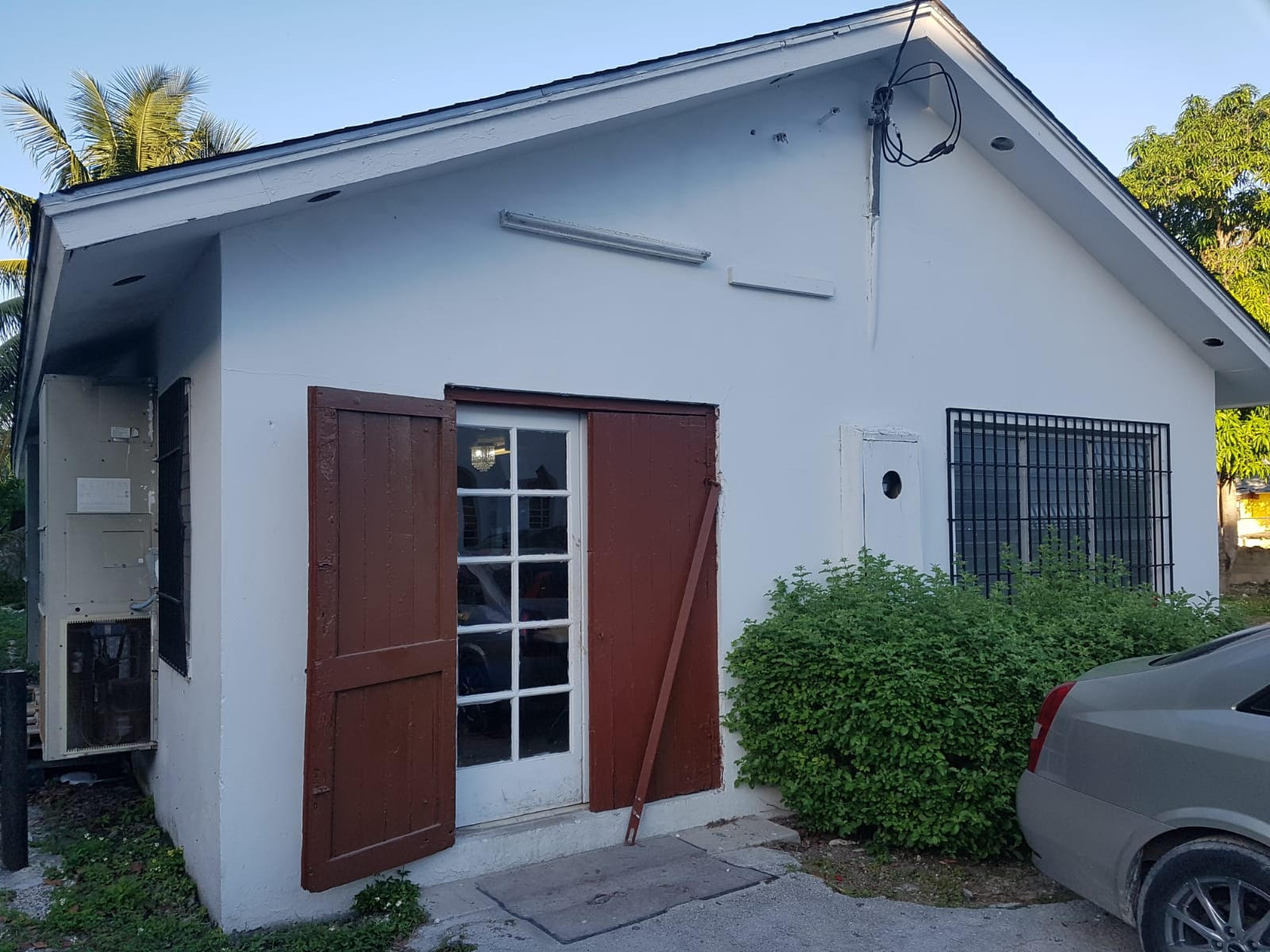 Street Reach is held in the church’s cafeteria through Sunlight Village.

The program is so ambitious, it has gone beyond the building, incorporating farming on a property on the same street in the past, after being generously given seeds by the Ministry of Agriculture. The program has also included field trips and the building once evolved into a homework centre throughout the week. Further, participants receive back to school and hygiene packages.

“We have really taken on the community,” said Bishop Hanna. 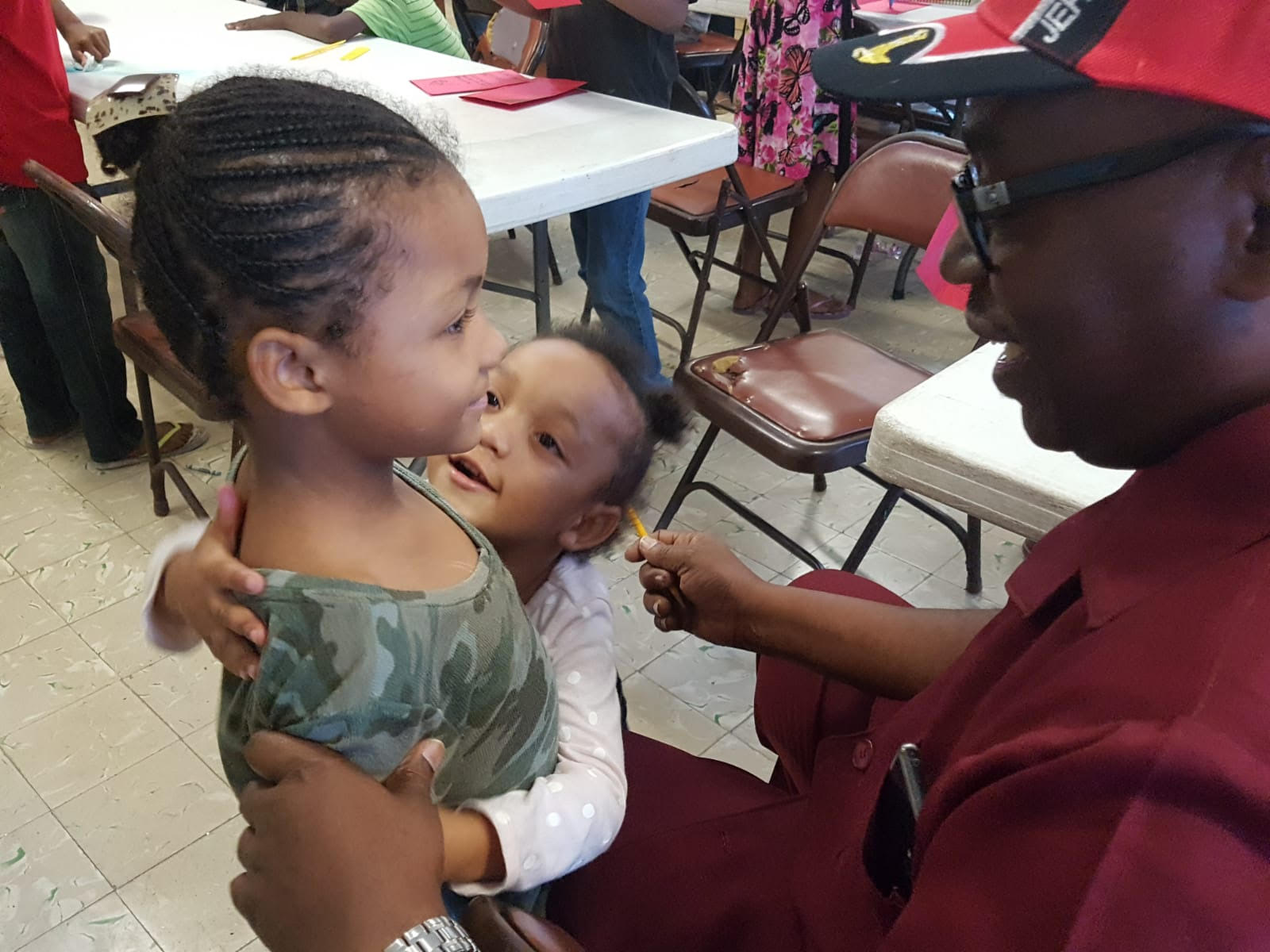 Lots of hugs at Street Reach

Street Reach operates diagonally to the school year with Christmas, Easter and summer breaks, and was supported by former Bain and Grants Town Member of Parliament, Bernard J. Nottage, before his passing. The volunteers – who are on a roster – were originally to teach children ages five to 12 between 3 pm and 5 pm. However, with the more mature children having responsibility for their siblings and still wishing to participate at slightly over 12, a few of the children are now younger while others are older.

Among the volunteers is Brayman Ferguson, a blind man, who has taught the children the 10 Commandments. Other volunteers are also from other churches.

“We introduce them to a relationship with Jesus and establish a relationship with the church. This program also builds self-esteem and we try to socialize the children,” said the retired Assistant Commissioner of Police, who had to discipline a few children that afternoon for throwing colouring pencils, pushing or shoving.

That wasn’t the case for 15-year-old Vashawna Bastian, whom I spoke to about how Street Reach has impacted her over the past two years. Questioned as to what she enjoys about Street Reach, she exclaimed, “Everything.”

“I try to apply the principles in my everyday life,” she said.

I asked her to elaborate.

“When I went to the shop, they gave me more than I was supposed to get, but I gave it back. I know there would be consequences later,” acknowledged Vashawna, who credits the program to some extent for the B grade in Religious Studies she received in the Bahamas Junior Certificate exam.

The 15-year-old, 10th grader went deeper. Clearly, the program allows her to be who she truly is.

“You can be free. Sometimes when you come from a different place, you be stressed out, but when I come here, I be free. I be me,” she said with hope in her eyes.

Meanwhile, 11-year-old Reepe Toussaint was visiting with his nine-year-old twin sisters, Wildene and Wilnedene. As he coloured, volunteer Charmaine Deleveaux walked over and viewed his artwork.

“Oh! This one is an artist. I know the talent when I see it. Work on that,” she said encouragingly.

It was the siblings first time at Street Reach in a year. They once lived through nearby Peter Street, but moved farther away. It’s too far to walk.

“I missed the creativity, fun and the Bible stories. They are so interesting,” said the Stephen Dillet Primary sixth grader, who wants to be an artist. 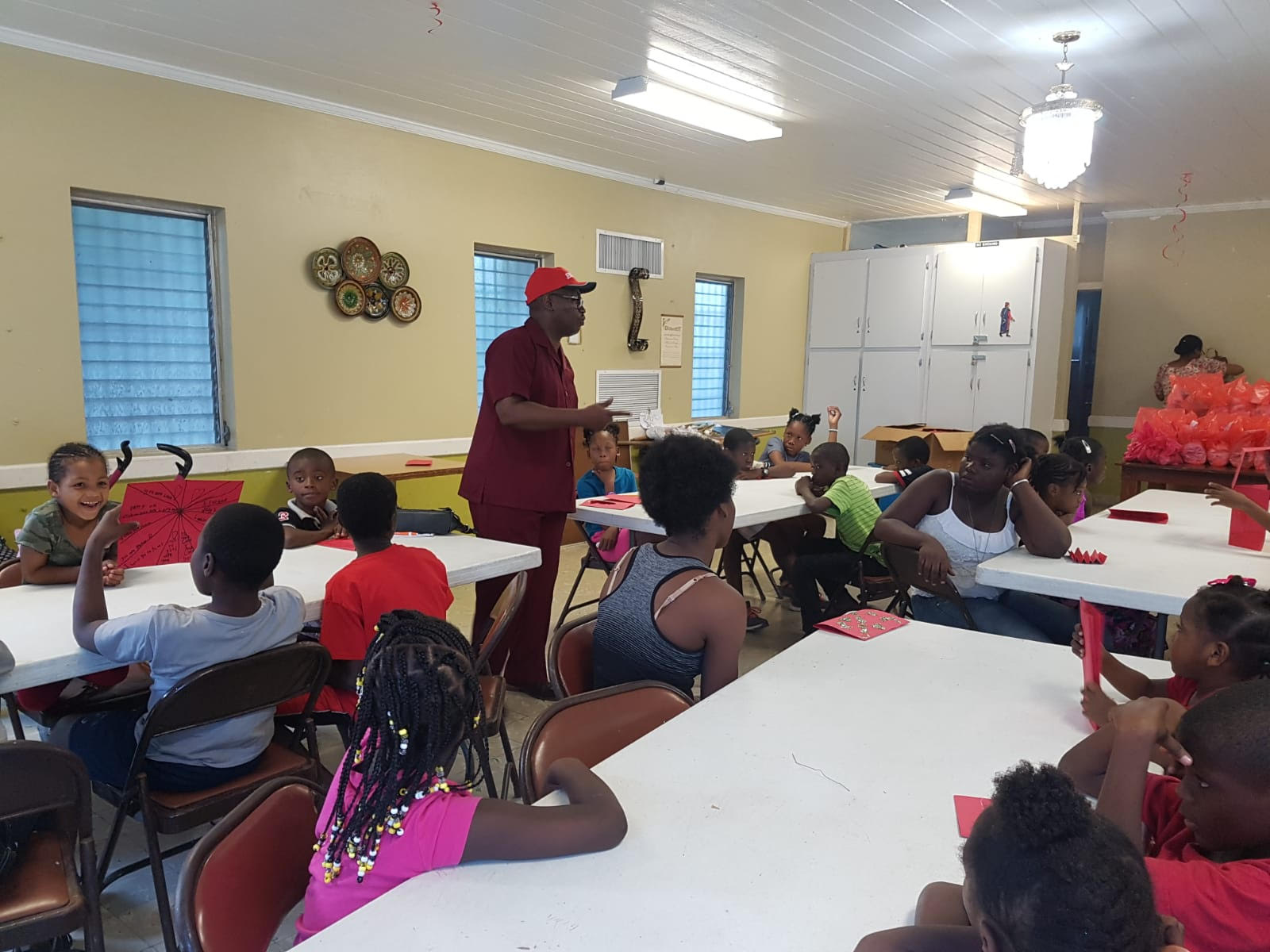 Bishop Hulan A. Hanna gives wise counsel to the attendees.

As the two hour program was coming to a close, some children began to line up orderly for their bags of goodies, while volunteers walked around and handed them out to those still seated. This time, it wasn’t the regular sandwiches, cake and juice. They were treated to hearty Christmas meals of ham, peas and rice, cole slaw, macaroni, cake and sodas. It was a sure meal for the day. 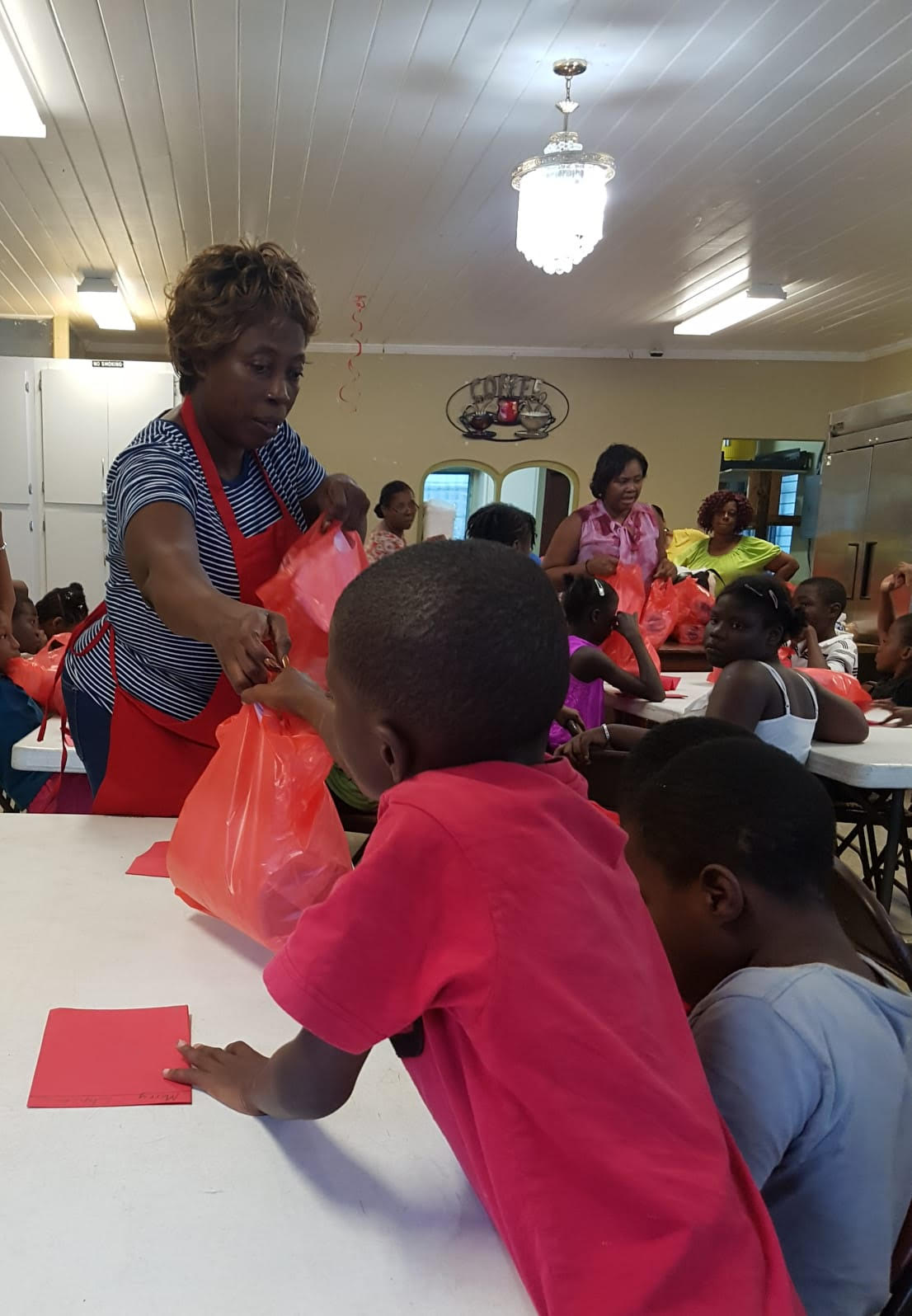 Volunteer, Sister Cyntheretta Miller hands out bags of goodies to the children.

Volunteer, Sister Valarie Hanna, joins in the distribution of treats.

I watched as the children excitedly left the little white building, walking to their nearby communities. Whether it was Peter Street, Toote Shop Corner, Brougham Street, Quakoo Street or some other corner, it was the last Street Reach for 2019.

And off they go, with treats in hand, following the final Street Reach meeting for 2019.

I think about my encounter with the children that day – many of whom come from less than sturdy backgrounds. Nevertheless, for them, Street Reach is a beacon of hope, a lighthouse…a social sanctuary: a Christ-centred, loving environment where at the end of the day, the volunteers rest assure they have extended their hearts and hands to a generation that needs them.