“We’re not just looking for success stories. It’s about being faithful even in insurmountable circumstances.” ~ Canon Basil Tynes

I had a 9:15 am appointment with Rector of St. Barnabas Anglican Church, Canon Basil Tynes and I refused to be late. In fact, I dared not be late. After all, this was the priest whom I figured would have no problem scolding me had I left him waiting. I therefore arrived shortly after the 9 o’clock hour and he was prepared to meet with me.

I was fortunate to have been squeezed into his busy schedule and even took an early lunch just to interview him. It was worth the sacrifice.

For 90 years, St. Barnabas has stood tall on the corners of Wulff and Baillou Hill Roads. It’s been a towering presence in the over-the-hill community, bordering Bain Town, Black Village and Coconut Grove.

Having been priest at the parish for the past 18 years, Canon Tynes, who attended the church as a child, confessed that when he took the helm he believes the congregation was a “bit shell shocked.”

Certainly, from my view, St. Barnabas is a different kind of Anglican church. As an outsider, I took note of when the dance ministry began. It was unusual by Anglican church standards. I then noticed the introduction of drums and sometimes the songs would not be orthodoxical to the Anglican faith. If I didn’t know better, I would think I was listening to congregants of a Baptist church. Then of course Canon Tynes’ sermons have, and continue to be, brutally honest. The reality is, he is direct and calls sin by its name. He speaks the truth unapologetically.

For Canon Tynes, it’s not about making people comfortable; rather, it’s about stirring people to look deep within, examine themselves and live lives above reproach, while helping those in need.

In the interim, Canon Tynes said St. Barnabas continues to operate as is the case in the Luke 17 parable, which admonishes the church to be dutiful servants. Therefore, he stated that the parish continues to reach out to the over-the-hill and wider communities – something he acknowledged has been occurring long before he took the reins.

As we discussed the storied and what he described as “very complex” history of the church, Canon Tynes said ultimately, St. Barnabas has always borne witness to the message of Jesus Christ – not just in word and sacrament, but in deed through time and talents.

“We try to meet the physical and spiritual needs of people and I believe we are making an impact. We’re not just looking for success stories. It’s about being faithful even in insurmountable circumstances. Some seem to slip through the cracks, but we’ve planted the seeds,” said the priest.

During my interview, I learned that the church has 31 ministries. From the Liturgical Dance, Marching & Concert Band and Family Life Ministries to a Youth Empowerment Program, the Anglican Girls’ Auxiliary and the Boys Brigade company. The latter has been a part of the church for 49 years, currently headed by Captain Henry Curry II. Also, over the years approximately 20 children from the band have gotten scholarships to Shaw University (North Carolina), based on the skills learned in conjunction with the Urban Renewal Band.

Further, the Sunday School team that has its own evangelism department, takes to the streets quarterly, literally inviting children to attend church. And last Christmas, the congregation did something different; instead of donating bags of grocery and what they thought people needed and/or wanted, many of them donated money towards Super Value gift certificates so those in need could go to the food store and make purchases “with dignity.”

Another one of the outreach ministries has been dubbed, Take 10. In conjunction with the Ministry of Social Services, the church has adopted 10 needy families of whose basic needs they look after, right down to checking on the academic progress of the children. Today, two of those children are students at the University of The Bahamas.

“We are really trying our best to reach out and make a difference. It only takes a little investment in people. It goes a long way. If we don’t invest in them now, then we will have to pay for them later,” said Canon Tynes, who has served in the priesthood for 31 years.

At one point, Canon Tynes opted to take me on a tour of the church’s Della & Stanley Wilson Pre-School which currently has 67 students. Clearly, the students are familiar with his presence and many hailed, and even shouted, “Good morning Father!” with one little girl being so excited, she ran and gave him a warm hug. It was a beautiful scene to watch.

Canon Tynes has a special bond with the pre-schoolers of his church.

Interestingly, Canon Tynes and his family gave up the rectory to pave the way for the transformation of the then pre-school to modern facilities. Construction of the pre-school was as a result of the generosity of Sir Franklyn and Lady Sharon Wilson who also created an endowment for the institution.

Meanwhile, the Family Life Ministry, in conjunction with the Ministry of Social Services also coordinates community service for individuals given probation by the court system. Currently six of them are on the compound working.

“We help them to move forward. It’s interesting to stop and hear their stories and to encourage them. Some of them come back and give free time and service to the church, saying, ‘Thank you,’” said Canon Tynes.

And for those who sit back and spectate, the priest took the opportunity to share the importance of getting involved.

“Not 100% of people would give the way they should, but there are always the few who do. You have to invest in those who are broken. It’s easy to stand outside and criticize, but the church needs to be involved.  It’s all about serving. It’s about giving back, even with limited resources,” he stated. 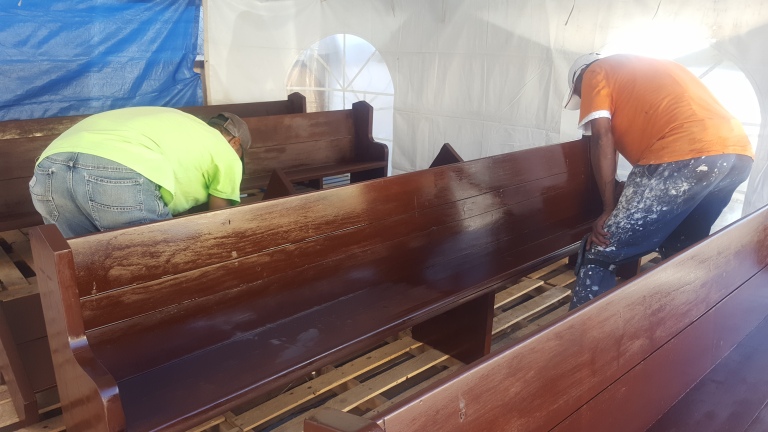 Men of the church, volunteering with the restoration of benches during my tour of the premises.

Meanwhile, Canon Tynes made it clear that whatever he does as Rector is what he is supposed to do. He is focused on being about his Father’s business.

“I’ve only done what I’m supposed to do. I am not looking for any recognition, praise, titles or positions,” he stressed.

As our conversation was coming to an end, I asked how he would sum up the work St. Barnabas does, Canon Tynes simply replied,” To know Christ and to make him known in concrete action.”