“We are visible. We walk the community and hear their concerns. We wanted them to know, ‘We’re on your turf.’”  ~ Pastor Samantha Evans

If you grew up in the capital of The Bahamas in the 1980s like me, the names of gangs like the Rebellions, Raiders and Syndicates might ring a bell.

Arthur Evans once identified with the gang life. However, 2019 makes 10 years he has been running a church as opposed to the streets.

Interestingly, this man of God, who grew up through Windsor Lane and Charles Vincent Street has come across and ministered to some of the same people he once warred with.

“I’ve gone from the gangster world to the pulpit within the same community,” said Bishop Arthur, Senior Pastor of Shekinah Family Word Center, located Quakoo Street, over the hill.

Bishop Arthur and his church family moved into the facility in September 2018. The location is different, but the mandate remains the same: Rebuilding the walls of the family – one family at a time.

“Every time we turn into this yard, it’s surreal what God has done. The faithfulness and favour of God has been upon us. What we paid in rent was so much more than what we will pay in mortgage,” he stated of the building that they did not think they could initially afford. 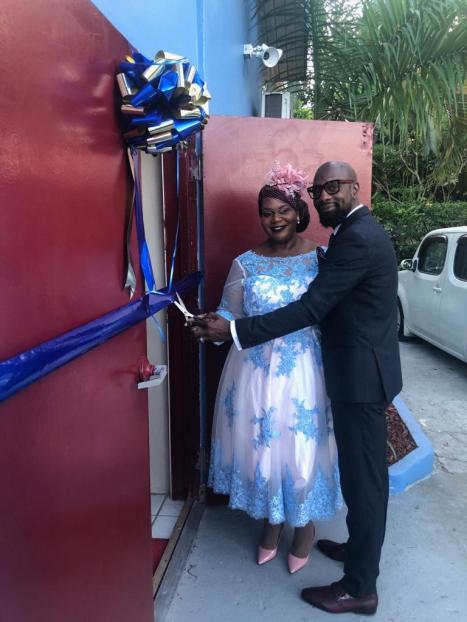 Shekinah Family Word Center, which was once located on East Street, has a congregation of approximately 120, but as fishers of men, their congregation goes beyond their walls.

“We are visible. We walk the community and hear their concerns. We wanted them to know, ‘We’re on your turf.’ We wanted to introduce ourselves,” said Pastor Samantha Evans, who is her husband’s greatest supporter. 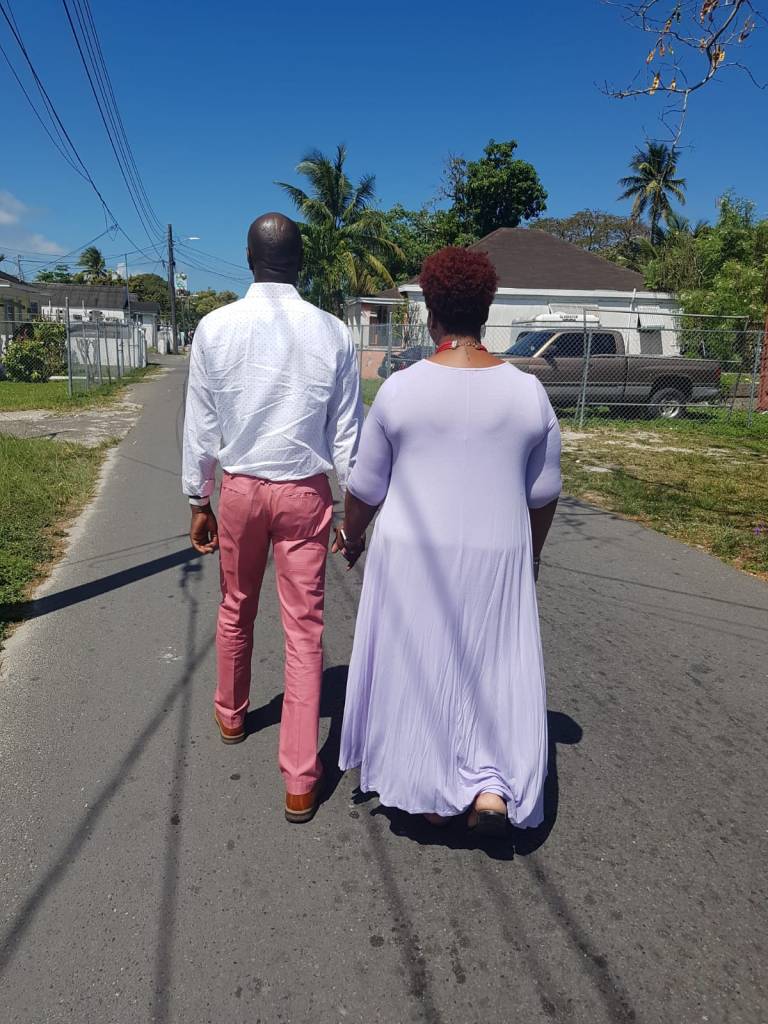 The Shekinah Family Word Center team hit the ground running immediately upon moving into their new church home, Quakoo Street. They have been intentional about being visible within the community.

A Light Over the Hill

The family ministry has been welcomed by residents of the Quakoo Street and surrounding areas with open arms, while simultaneously welcoming those residents into their fold. Not long after moving in, the team joined in a walkabout in the Windsor Park area with a representative of the Prime Minister’s office.

“We met a woman who had no lock on her door. She was using a cooking spoon to lock the door. My husband later returned and changed her lock. We have also met a man who uses a wheelchair, who had to wait for someone to come by to get him in and out of his house every day. We decided to build a ramp to assist. We have been identifying people in the community, wherever the need, working on small projects,” said Pastor Evans.

During Christmas 2018, the church hosted Caroling at Quakoo, during which time they literally walked the streets singing yuletide hymns, adorned in glow in the dark necklaces and bracelets.

“We stopped every four houses and we sang, giving out cookies and candies. People in the neighbourhood started to follow us. Even when we stopped to the Quakoo Street police station, they were in shock,” reminisced the beaming Pastor Evans.

They also hosted a community breakfast and later, a Give Life event where they served 300 hot dogs and hamburgers, had free hair cutting, popcorn, clothing, shoes and helped distribute “love packages” from Starbucks, overall serving some 650 people.

“Before you catch the fish you have to throw out some bait. Christ is the end product, but we are using it for bait for the kingdom. This is our strategy to compel them to come: showing we care. This is the mandate of every believer. When you show them you care first, then you have their attention,” she stated.

A beautiful glass cross greets members and visitors upon entrance to the Quakoo Street church.

In fact, when they moved into the building at the beginning of the 2018-2019 academic year, one Sunday they brought school supplies for their own members’ children. However, the Bishop and his wife felt led of the Lord to have those same children walk the community and distribute the school supplies to those more in need.

“They were so excited. We are teaching them to give and to be a blessing. That was major,” recalled Pastor Evans. 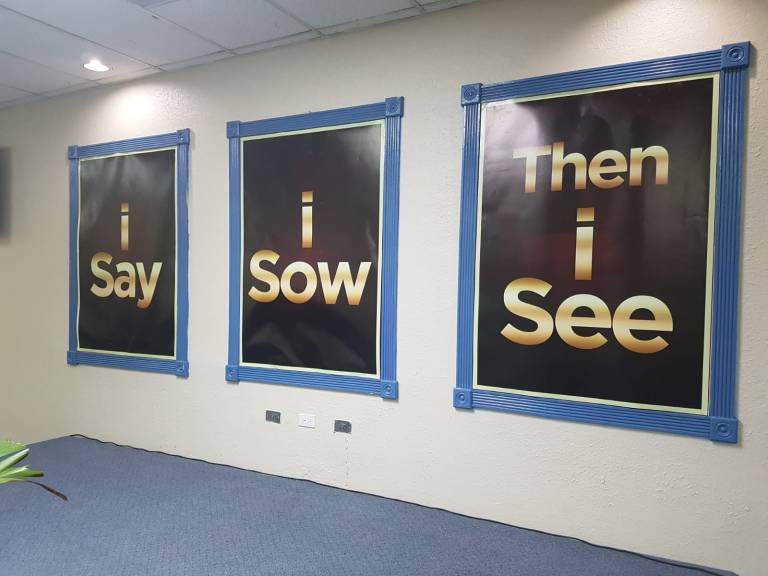 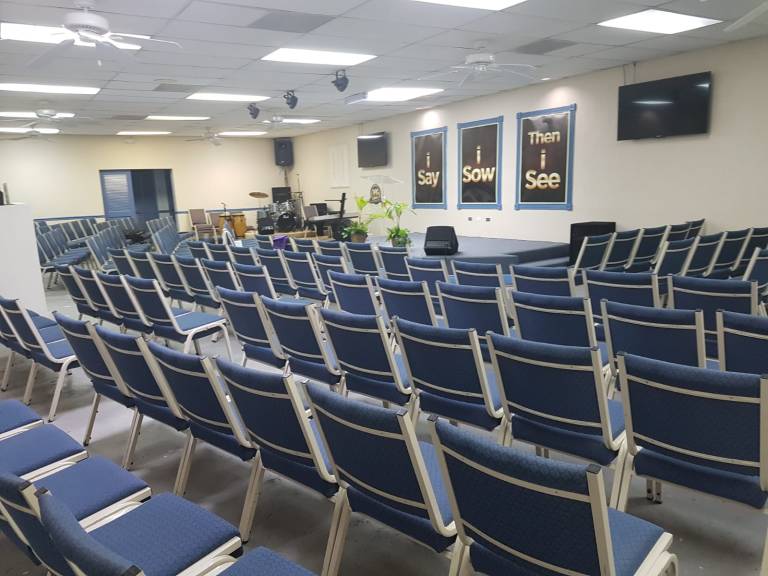 Questioned as to whether she ever saw herself as a pastor’s wife, the ever-smiling, pleasant Pastor Evans admitted to initially having reservations.

“One morning, he woke me up and said the Lord spoke to him and wanted him to lead his people. I told him that’s not the Lord and go back to sleep,” she said chuckling.

“I’ve had reservations, but never my husband. He used to be in a gang, so there were no reservations. It is easy for him to reach them. My husband said he wanted to be in the heart of where the trouble is. Now, I embrace it. I see the wonderful things God is doing. I see my husband’s passion and commitment for the people of God, for their growth and development. It’s a pleasure following his lead,” said Pastor Evans, who has been married to the Bishop for 24 years.

The couple stands outside the church.

It is clear that Shekinah Family Word Center is a giving ministry. A food bank has been started and if people are in need, the team privately distributes right down to soap.

It is Pastor Evans’ hope that once families receive a hand up, they would pay it forward. Certainly from the dynamics and strength of the Evans’ own family – inclusive of four children who are very involved in the ministry – they believe in a firm structure.

“We’ve built our family on the solid rock. That’s how we can help build other families,” said Pastor Evans.

2 thoughts on “Shining their Light Over the Hill”