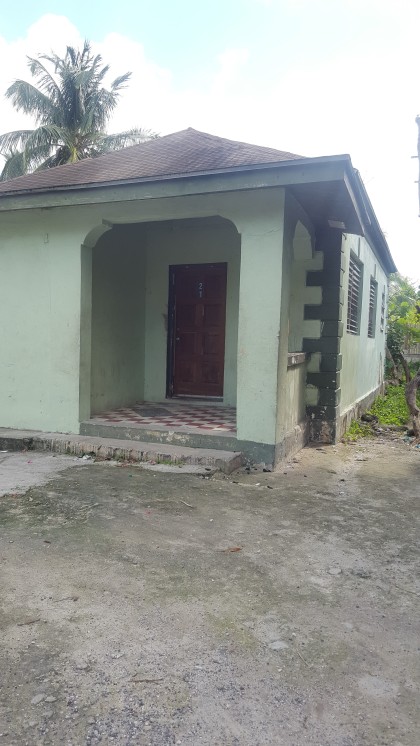 After recently taking this photo, I wondered if the people who live or lived in this house on Lewis Street in Grants Town, know its historical significance.

Thanks to my former seventh grade English teacher and the daughter of our very own champion for civil rights, the late Sir Randol Fawkes, I learned that it is where African American Civil Rights Leader, Dr. Martin Luther King resided while in The Bahamas in November 1958.

Lewis Street is over the hill in Nassau, Bahamas; it’s an urban area that for decades was the seat of men and women who fought for change in so many ways – many of whom became nation leaders.

Additionally, while in The Bahamas, Dr. King met with Sir Randol in the real estate offices of Basil Sands. The pair conversed about their causes and in a recent presentation at the Neville and Nora Dorsett Community Center – also through Lewis Street – Ms. Fawkes shared what the conversation was like, based on a speech her father later gave to College of The Bahamas students:

“The power of the Living Word and the example of Jesus were the sum and substance of the conversation between Rev. Dr. Martin Luther King and me when he visited The Bahamas in November, 1958. We both believed that the success of his civil rights movement and The Bahamas Federation of Labour’s nineteen-day General Strike and my subsequent sedition case could not be understood without reference to the divine dimensions,” said Sir Randol.

“King was concentration personified. I explained my philosophy of ‘A Mighty Meekness.’ He compared it with his ‘Non-Violent Resistance’ and remarked, ‘Brother Fawkes, we were on the same wave length.’ With a slow, deliberate, almost musical southern accent King continued, ‘Although separated by thousands of miles of land, sea and air, yet we were vicariously participating in each other’s struggle for human dignity and freedom,'” added Sir Randol.

Furthermore, in describing his first visit to Nassau in 1958, King would later write to Fawkes and in his letter, he prophesied:

“Please allow me to again express my personal appreciation to you for your determined courage and dedication to the cause of freedom and human dignity. I am sure that your name will long live in the annals of your nation’s history for your willingness to suffer and sacrifice for a cause that you know is right.”

Thank you Rosalie Fawkes for highlighting your father’s rich legacy in several ways, including through your presentation on January 21st, Martin Luther King Day,  noting that Dr. King came to lend support. It was a fitting tribute to both men.