“I’d rather build a boy than to mend a man.” ~ Fernley Palmer

The longest serving captain of any Boys Brigade company worldwide!

On the corner of Flint and East Streets sits an old, small brown and cream building. The former milk stand seems unassuming, but within its door is an 88-year-old man who has a rich history and is proud to be a product of over the hill.

Fernley Palmer at the entrance of his business

When I walked into the tiny space, I was greeted by the silver-haired man, who wears no glasses and has reportedly never been sick. Fernley Palmer is welcoming, humble and his memory is as sharp as a tack.

Mr. Palmer was born in Mason’s Addition and as a child became friends with the country’s first Prime Minister, Sir Lynden Pindling. In fact, Mr. Palmer revealed that Sir Lynden was his best man when he got married and godfather to his eldest child, who recently turned 62.

“My mother and father, and Sir Lynden’s father, Arnold F. Pindling, came from Jamaica in April 1922 – 96 years ago. Sir Lynden and I were born the same year through the same corner. We were close friends,” said Mr. Palmer, who was later appointed a stalwart councilor of the Progressive Liberal Party, led by Sir Lynden.

Questioned as to why he never moved his Justice of the Peace business from over the hill after over 34 years at the location, having served as a contractor as well, Mr. Palmer said, “I only had one break-in and that was 1986; otherwise, no problem. The young men around here see me as their father. I want them to know they can be decent fathers, husbands…men. I want to be here to help my people, to help the young men in particular. I have devotions every morning in this place and every day, I pray, ‘Help me to help someone today,’” he stated.

Fernley Palmer at the entrance of his business

In fact, he helps people often, revealing that by the end of rendering JP services, he sometimes would tell a client, “Already taken care of. No charge,” referring to a line in the song of Shirley Caesar’s popular gospel song, No Charge.

Mr. Palmer then echoed a familiar message to the people over the hill.

“Do not allow the world to hold you down in mental slavery. You can rise as high as the sun. Don’t let where you were born, keep you down. The word ghetto is used to keep shackles on the black population,” he said.

In the interim, what Fernley Palmer is perhaps best known for his involvement in Boys Brigade for 75 years, particularly his 60 years as captain of the 14th Company of Boys Brigade, which is connected to Zion Baptist Church, East Shirley Street. He is the longest serving Boys Brigade captain in the world. 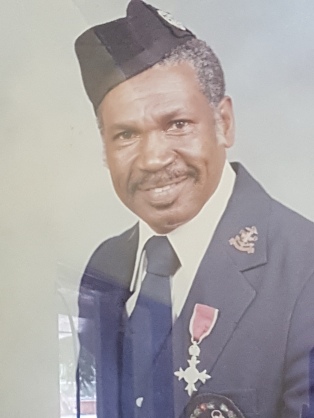 It was Mr. Palmer who coined the adage, “I’d rather build a boy than to mend a man.” And that is what he has been doing for six decades as a leader in the organization that intertwines Christianity and discipline. In fact, in 2017, Mr. Palmer was awarded with the government’s Living Legend Award for Youth Practitioners and many years ago, had the Member of the Most Excellent Order of the British Empire (MBE) bestowed upon him.

As the last of 13 children of a police officer, Mr. Palmer grew up strictly disciplined, embedding the same into his own children.  However, he felt purposed to help build young men – many who went on to become leaders. Among them are 23 ministers of the gospel, including Anglican Archdeacon Father James Palacious, Apostle Clifford Smith and Reverend Simeon Hall, along with Members of Parliament, Dr. Franklyn Walkine and the late Calvin Johnson. These are in addition to Royal Bahamas Defence Force Commodore, Roderick Bowe, Chief Superintendent of the Royal Bahamas Police Force, Ken Strachan and many others.

Captain Fernley Palmer salutes Britain’s Her Majesty Queen Elizabeth II, during a parade in her honour while visiting The Bahamas in 1966

In fact, while visiting with Mr. Palmer, at one point, my pen ran out of ink and he proudly loan me a custom-made pen gifted to him by a former member of the Boys Brigade, who is now a Defence Force Officer. The weighty pen with engravings of Mr. Palmer’s name, a ship and a ship’s steering wheel, is described as a “special pen.” Mr. Palmer hastily let me know that he does not lend it to just anyone. I immediately knew this small gift was worth a lot to him. A boy, turned a man, returned to say thanks. 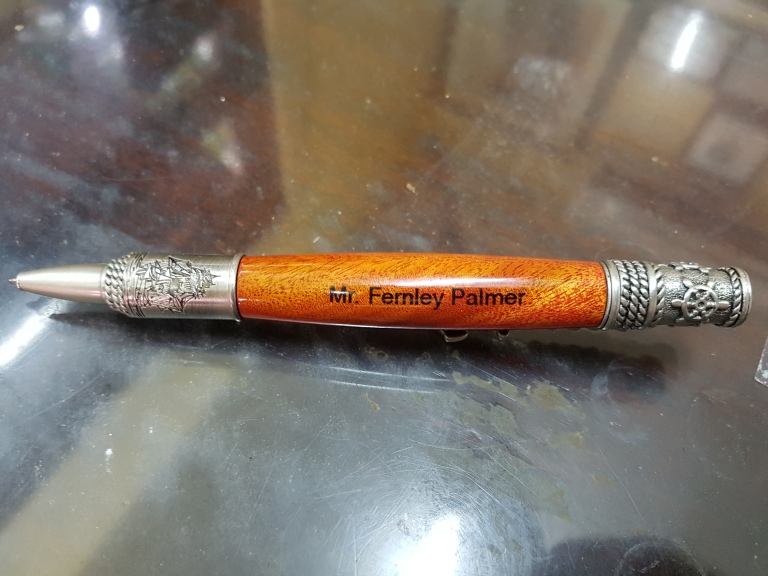 This custom made pen was given to Captain Palmer from former Boys Brigade member, Clinton Johnson, who was molded by him as a young boy. It was a thank you gift following Clinton’s promotion on the Royal Bahamas Defence Force.

Mr. Palmer also went as high as becoming captain for the western Caribbean region of Boys Brigade, which at the time included The Bahamas, Belize, the Cayman Islands, Jamaica, Guyana and Haiti. Along with the captain of the 13th Company of Boys Brigade, Ekron Pratt, Mr. Palmer was instrumental in writing the organization’s constitution for the Caribbean. He deems it one of his proudest moments, besides when he organized and led the parade for Great Britain’s Her Majesty Queen Elizabeth II’s visit to The Bahamas in February 1966. He proudly gave her what he called, ‘The Royal Salute.’

Meantime, another memorable moment in Mr. Palmer’s life was when he was one of three judges for the heavyweight championship between boxing great, Muhamma Ali and Trevor Berbick in The Bahamas back in December 1981. The member of the Boxing Commission dubbed the showdown, ‘Drama in Bahama.’

And after 88 years of living on the earth, you can imagine that there are many other outstanding achievements of this giant from over the hill. However, I strongly believe that among the brightest stars is his work with the Boys Brigade through which he has built many boys as opposed to bending men.

One thought on “Fernley Palmer: A lifetime of Building Boys”