“You’re never too old to set another goal or dream another dream…don’t let where you live or your current situation determine how you’re going to live the rest of your life.” ~ Terwaashna Robinson

Terwaashna Robinson once lived in a one-bedroom house over the hill with no light and no water. It is a fact she does not run from. Today, she still lives over the hill, but in better conditions; in fact, she resides in historic Grants Town and admonishes people: “Don’t let where you live or your current situation determine how you’re going to live the rest of your life.”

Terwaashna has used the circumstances of her youth as a stepping stone, as opposed to a stumbling block. In May 2018, this Lewis Street resident was the top 2018 graduate of The Bahamas Technical and Vocational Institution, graduating with a 4.0 grade point average. She is now the holder of an Associate of Applied Science degree in Office Administration and a certificate in Human Resources Management. She also received the Aliv Award of Excellence and was awarded $500.

“One’s mentality overall determines the outcomes you want for your life. How I lived growing up gave me the mindset that I wanted better and that there had to be better out there,” said Terwaashna. 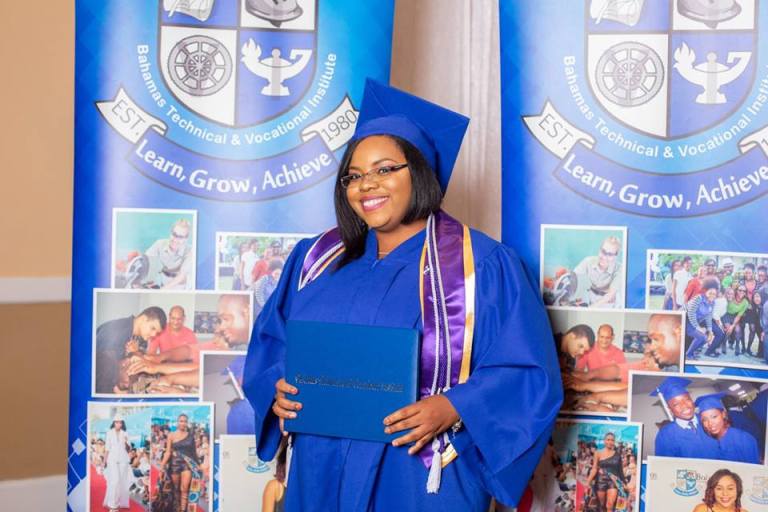 A proud Terwaashna on graduation day.

It was at the age of 12 that Terwaashna moved into the Bain and Grants Town consituency. She was quite forthcoming, noting that her parents’ separation when she was in sixth grade, resulted in the move that changed her life.

“Growing up over the hill wasn’t easy at all…it was a total adjustment for my siblings and I as our whole way of living changed drastically. We lived in a one bedroom home with no light and no running water,” she said.

Nevertheless, this 31-year-old has long been determined to succeed. In 2016, the Bain and Grants Town Scholarship Fund made it possible for her to be one of four residents of that area to have the financial backing to complete post-secondary pursuits.

Back then, Ms. Robinson spoke on behalf of the recipients, stating that the opportunity was a “life changer” that would elevate her current situation, which would enable her to provide a better life for her son Lyric.

When Terwaashna walked across the stage as BTVI’s top graduate, it was a crowning moment for the young woman who attended R. M. Bailey Senior High School in New Providence, but obtained her high school diploma from Miami Norland Senior High in 2004.

“After completing high school I always talked about wanting to go to college but never put any motion behind it. I would always complain about not having the funding to do so. But after I had my son, Lyric, who is now six, I became determined to seek the higher education I had often talked about getting,” she said.

“It all started for me when I found out that the Department of Social Services offered scholarships for persons pursuing a certificate in any course offered at BTVI and after the completion of this I applied for a scholarship through the Bain and Grants Town Scholarship Fund. As a recipient, I was able to attend BTVI to obtain a degree in the field I had worked in shortly after completing high school. Now I have both experience and education. It also gave me the opportunity to achieve a goal I had for over 10 years,” she beamed. 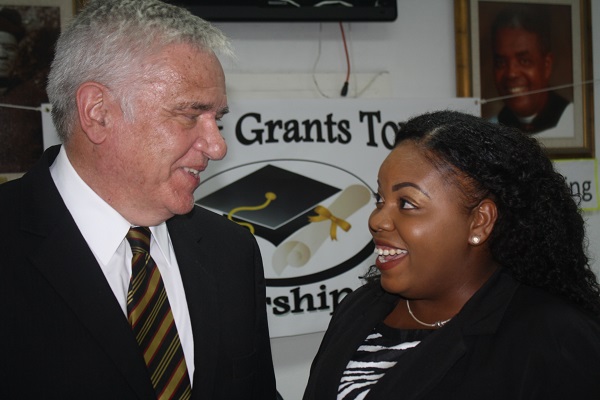 During her response on behalf of BTVI’s Class of 2018, Terwaashna said she wished the former Bain and Grants Town Member of Parliament, the late Dr. Bernard Nottage, was there to witness her graduating. He was present for the announcement of the scholarship recipients at a press conference in 2016 and was so impressed, he gave a $10,000 personal cheque towards the fund.

Questioned as to what kept her going, even when things were tough, she immediately responded, “My son.”

To provide a better life for Lyric was her motivation.

“I grew up in poverty and didn’t want that for my son.  I can remember shortly after giving birth to him I held him in my arms and promised him that he would live a better life than I did. I prayed that he would never see a day of hunger or homelessness, may he forever know what it is to be in a home that’s filled with love and laughter and that everything he puts his hand to do is for good and that he shall forever prosper,” she proclaimed.

Meanwhile, there’s no stopping this strong-minded Terwaashna. She wants to further her education by obtaining a Bachelor’s degree in International Business and Human Resources Management with the goal of eventually becoming an entrepreneur.

“My baby sister is a brilliant and beautiful young lady. I admire her drive and determination. She works extremely hard to achieve those grades; they aren’t handed to her. Anything she puts her mind to, she goes after and achieves. She currently has the second highest grade point average in the Bain and Grants Town Constituency at 3.81,” said the proud sister.

“My mother reared us with a strict upbringing. We weren’t allowed to keep much company or be out passed a certain time. Back then I thought that she was being mean, but now as an adult I understand why she grew us up the way she did. She wanted better for us and didn’t want us to fall prey to the pressures of growing up in ‘the hood,’” she added.

As we concluded, Terwaashna, who has much to be proud of, gave sound advice for the people over the hill.

“You’re never too old to set another goal or dream another dream. I encourage you all to chase your dreams, stay on track, love yourself fully. Don’t let where you live or your current situation determine how you’re going to live the rest of your life,” she advised.