“There is more that unites us as junkanooers than what separates us.  These superficial boundaries and people not speaking to each other, these divisions have stopped us from charting the way forward. I aine gat no time fa dat.” ~ Arlene Nash-Ferguson 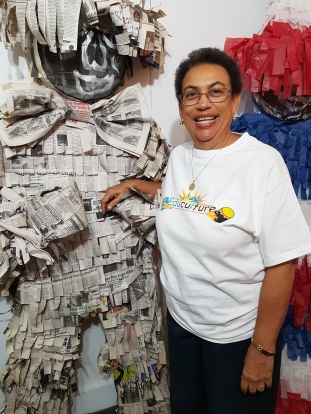 Arlene Nash-Ferguson grew up on top of the hill – not over the hill. Yet, this proud Bahamian has a strong pull towards the history of this heritage community and her love for the nation’s culture runs deeply in her veins.

So what is the difference between the top of the hill and over the hill?

“I was born Delancey Street, but grew up through West Street. The area was formerly known as Delancey Town – established by freed African slaves. It was not technically over the hill, but it was one of the three townships – including Grants Town and Bain Town – that surrounded Old Nassau,” she explained.

The northern boundary of over the hill is reported to begin on School Lane.

While many persons born in the historically rich area bordering over the hill have sold those houses and moved into the suburbs, Arlene decided to turn the family homestead on West Street into Educulture Junkanoo Museum and Resource Centre, an experiential educational platform that celebrates the spirit of The Bahamas through history and the artistry of Junkanoo.

The two-storey structure was built in 1959 just two doors south of the house her grandfather, Frederick Bosfield, built for his bride in 1900. She clearly has a lot of connectivity to the area.

“When I was growing up here, who would have thought this would have become such a prime location. There’s Gracycliff Restaurant, The National Art Gallery of The Bahamas, St. Francis Xavier Cathedral, John Watlings and lots of foot traffic,” she said.

The avid proponent of Bahamian history spoke proudly of some of the movers and shakers of the country who were also born in Delancey Town.

“You can go house by house in Delancey Town and all you can find are nation builders who were born here. Former Member of Parliament (MP) and mortician, Dr. Marcus Bethel; former MP, A. F. Adderley and his son’s Paul and Francis; the first Bahamian Bishop of the Anglican Diocese, Michael Eldon and his sister Dr. Keva Bethel, who was the first President of the College of The Bahamas and the suffragettes like Mary Ingraham; also, Sir Cecil Wallace-Whitfield, who became leader of the Free National Movement, lived at the end of our street. The area is so rich,” she said excitedly.

Meanwhile, Arlene has very strong views as to present-day over the hill and what she considers to be the denigration of the area.

“I am extremely disappointed when I hear people refer to our heritage communities as the ghetto and the inner cities. They are misnomers we have borrowed from the United States. Communities will live down to what you call them. You use derogatory terms, yet you’re trying to lift them up?” she questioned.

Further, Arlene believes some people in the area do not have a connection to its rich, historical roots.

“The properties have been sold or rented and some people who occupy them now, they do not have the same pride. Nobody has the love for these areas like the people who once lived here. If change will happen, it begins with us,” she concluded.

Arlene’s initial plans were to turn the two-storey yellow structure where she grew up into apartments; instead, Educulture provides tours of the museum to cruise ship personnel, guided Ride and Learn school tours, and Junkanoo workshops which include a history lesson of the festival, the viewing of artifacts and the making of hats, ending with a rush out. 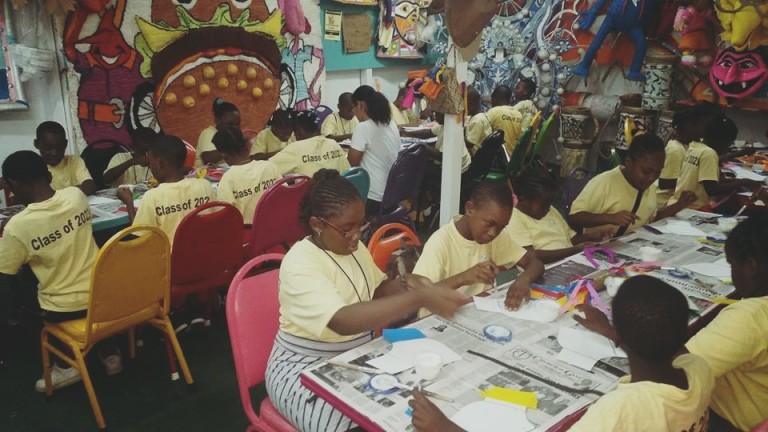 Students at a Junkanoo workshop in the Junkanoo Central Shack at Educulture.

Also in the museum is an area dedicated to a few of Arlene’s prized costumes, in addition to the evolution of Junkanoo costumes made for our national street festival that connects us as a people to our African heritage. From sponge, straw and leaves to costumes created from rags, newspapers, tissue and eventually crepe paper, the place is a tapestry of the festival. You can also find a table with artifacts such as a slop bucket, flat and goose irons, a hurricane lamp and wooden scrubbing board – reminders of old Nassau. 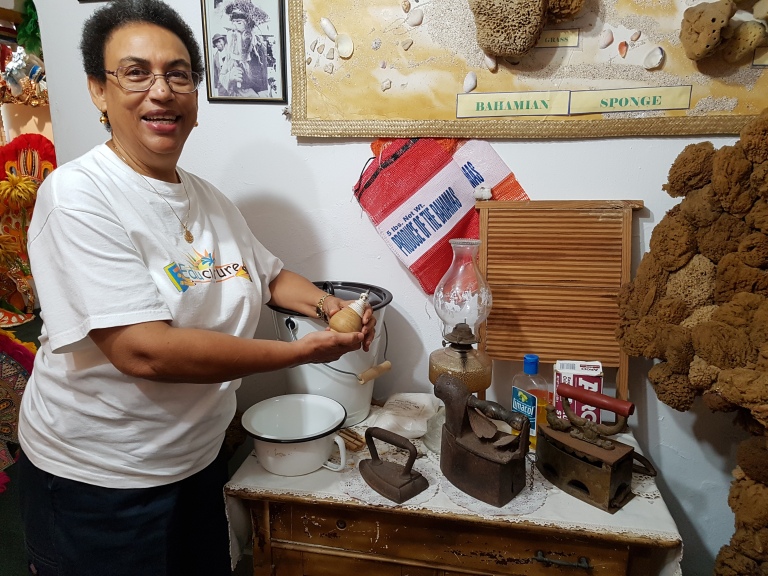 Arlene at Educulture with artifacts from yesteryear.

When Arlene speaks of Bahamian history and culture, her passion is evident. You hear it in her voice. You see it in her eyes. Whenever the cultural enthusiast and veteran educator is introduced to speak anywhere, it’s the shortest, sweetest intro ever: “I am a Bahamian by birth. I am a teacher by profession. I am a junkanooer by passion. I am a child of God by inheritance.” Done. Nothing long and drawn out; it speaks succinctly to who she is.

The vision of Educulture was born when Arlene worked along with cultural great, the late Jackson Burnside on the book, I Come to Get Me: An Inside Look at the Junkanoo Festival. 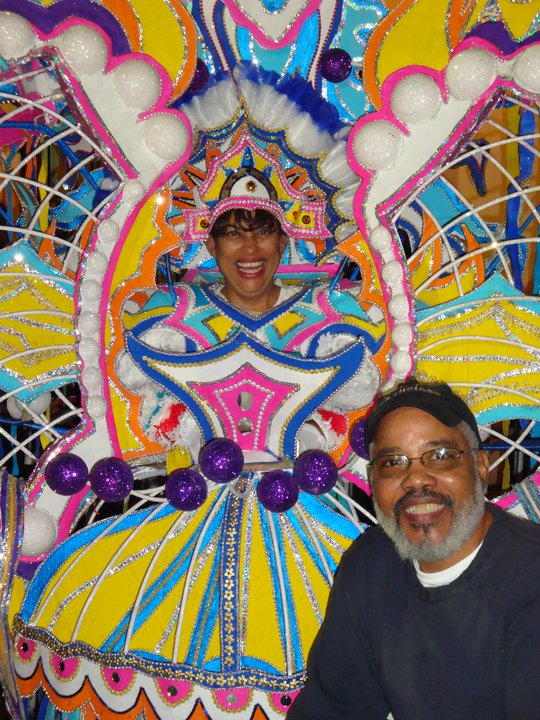 Arlene and the late Jackson Burnside.

“In that very fertile environment, he opened my eyes. He inspired out of that conversation my twin passion of education and culture. Educulture became my dream job where I work with and share my knowledge of Bahamian culture. I can’t think of anything else I would prefer to be doing than this,” said the former Principal of St. John’s College.

“To branch out and start a business was something foreign, but my husband Silbert was the driving force. Every obstacle I threw at him, he had an answer,” she revealed.

Additionally, since the age of four, Arlene – who was born to Harold Otis Nash (H. O. Nash, whom the junior school is named in honour of) and Olga Bosfield-Nash – has been rushing in Junkanoo. The avid junkanooer took a hiatus from rushing during her high school years as her mother did not think it was lady-like. However, Arlene loved Junkanoo so much that once she began returning home from university on Christmas breaks, she took to Bay Street again. 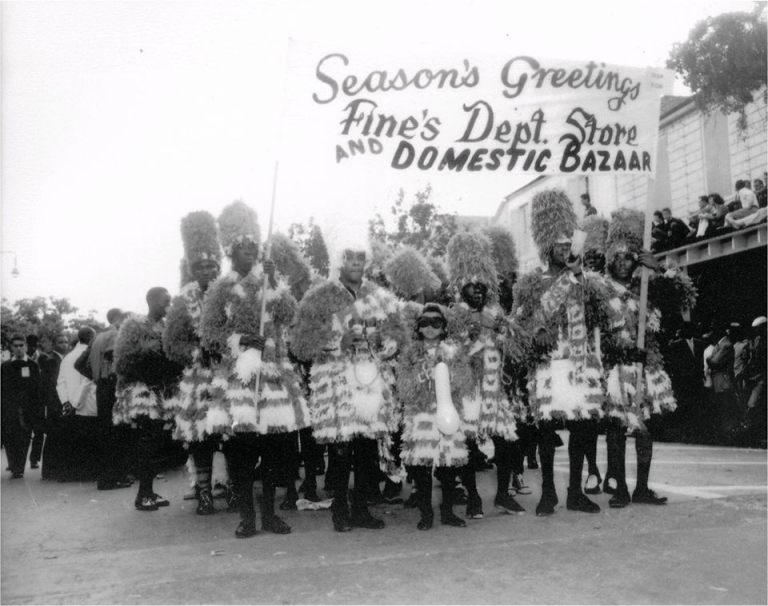 Arlene (front and centre) at about the age of six, about to rush in a Junkanoo parade.

Since then, she has immersed herself in this art form, helping to chart it into a preeminent national cultural expression. In 1983 Arlene began rushing with the Saxons and in 1993 she became a part of the steering team for the One Family Junkanoo and Community Organization, rushing with the group until 2014. Arlene also served on the National Junkanoo Committee for 24 years. Today, she rushes with B category group, Conquerors for Christ, taking her granddaughter for the experience, having introduced her at the age four as was done for her as a child. 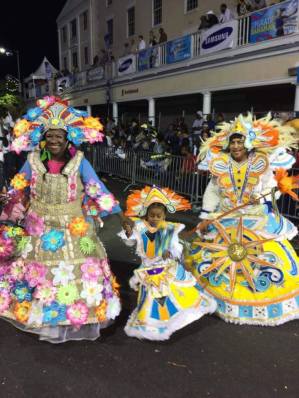 Co-founder of Conquerors for Christ Junkanoo group, Dr. Ann Higgins, Arlene’s grand-daughter – who she introduced to rushing in Junkanoo at the age of four – and Arlene.

“There is more that unites us as junkanooers than what separates us.  These superficial boundaries and people not speaking to each other, these divisions have stopped us from charting the way forward. I aine gat no time fa dat,” she boldly declared.

“I joined Conquerors for Christ for what they stand for and I wanted to be in a less competitive group. At the heart of it all though, I am still passionate about junkanoo. I am just concerned that junkanoo has been reduced to a parade and competition. It was started as a resistance to slavery. It reflects the true spirit and strength of Bahamians,” she said.

One thought on “Arlene Nash-Ferguson: The Little Girl who became a Cultural Enthusiast”