“After his death, I witnessed successive governments try to wipe him out of history and to attribute his accomplishments to others.  I was simply stunned at these blatant efforts to revise history.  After engaging in talks with family members, we knew that we had the documentation and the capacity to counteract the damage that was being done to his legacy.” ~ Rosalie Fawkes 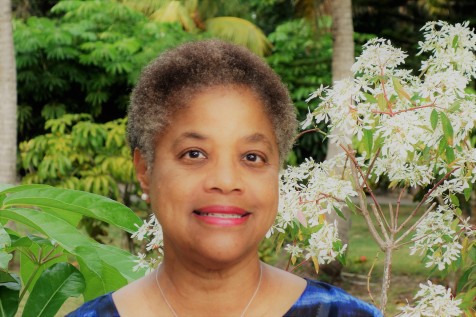 You might think being the daughter of the Father of the Labour Movement, the late Sir Randol Fawkes, means living in his shadow. But Rosalie Fawkes has never attempted to replicate the radical, revolutionary man whose faith moved mountains.

“My path is uniquely my own and throughout life, I have often consulted with others but I always had the freedom to follow my own inclinations and interests,” she said.

Although Ms. Fawkes mentioned the “firestorm” her father encountered during his years of activism, she revealed that for the most part, her parents shielded the children from the tumult that swirled around them in their formative years. 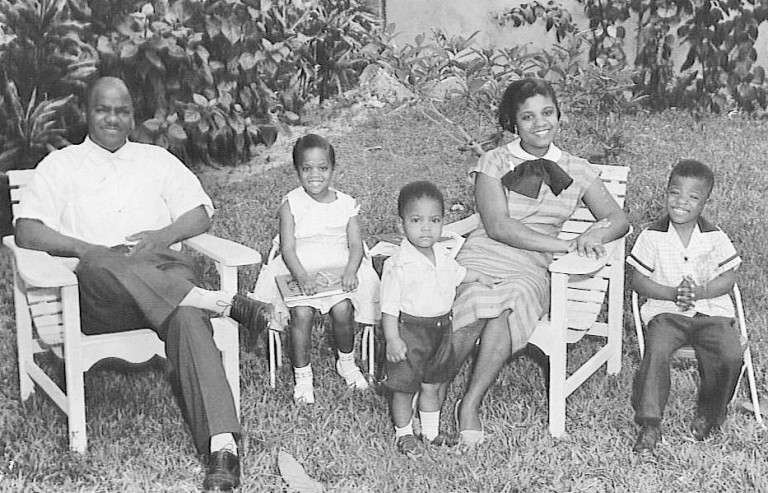 Father of the Labour Movement, Sir Randol Fawkes and his family. From left to right are Sir Randol, Rosalie, Douglas, Jacqueline Lady Fawkes and Francis at their McPherson Street home, Over-The-Hill.

“Dad was a visionary and throughout life he took flying leaps of faith which put his career, family, finances, safety and life at risk as he tried to  overthrow the minority, ‘white oligarchy’ as he termed them,” stated Ms. Fawkes.

“My parents kept us occupied with piano lessons and almost daily visits to the Fort Hill and we were not burdened by the battles fought by my father.   I wish that I had known then that history was being made…I would have tried to be more observant.  I do recall attending meetings at The Bahamas Federation of Labour and standing on Windsor Park and listening to Suffragette Marion Stuart speak with violence as a torrent of words would pour forth into the microphone,” she added.

She went on to explain that The Bahamas Federation of Labour was a faith based movement and attending meetings were like attending church.

“The prayers were forceful and the groans were strong as the people called upon God to deliver them from oppression,” recalled Ms. Fawkes.

Recently, I drove through the gates of La Campanella (The Bells), situated on John F. Kennedy Drive.  Immediately to the right stood the house of Sir Randol and Jacqueline Lady Fawkes. I met Sir Randol in the 1990s when I was a young, Nassau Guardian reporter. He frequented the newsroom and there were several sittings of the Senate when, in his old age, I saw that his radical spirit was still alive as he would  burst into sittings and demand the pension that he claimed the government was unfairly withholding from him.  Even in his twilight years, he was fearless and he went down as a fighter.

As I continued to drive farther into the four-acre, well-manicured property, I approached the home of their only daughter. It is the property on which they have lived in solitude for 52 years. 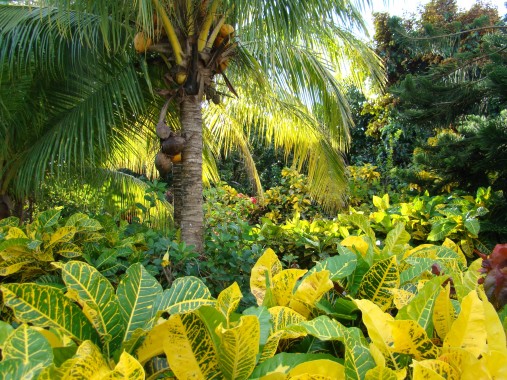 Croton trees planted at La Campanella by Jacqueline Lady Fawkes; they were brought from the yard of their former residence, Anderson Street, Over-The-Hill.

Ms. Fawkes did not always live at La Campanella. She grew up on McPherson Street in Grants Town, during the pound, shilling and pence days. It was a time when Over-The-Hill was community in every sense of the word. She spent 10 years through that corner, where S. C. McPherson (whom the junior school is named in honour) was her neighbour. 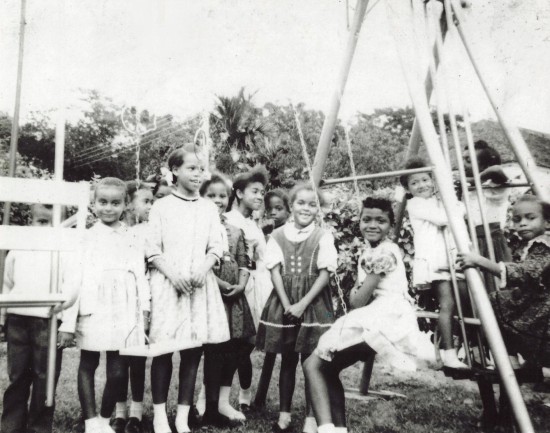 A birthday party for Rosalie at their McPherson Street home.

For my blog, I usually call people by their first names, but it is hard to call this McPherson Street girl who became my English teacher anything but Ms. Fawkes. I met her while in seventh grade at Queen’s College. I remember being so impressed with this woman who perfectly spoke the Queen’s English and always conducted herself as a lady. Now, many years later, my former teacher welcomed me into her immaculate home that was adorned with lovely, vintage furniture and walls dotted with paintings, including a few she purchased  while visiting Africa.

It is within the precincts of that home where Ms. Fawkes continues to create her own legacy. She taught piano lessons off and on for nearly thirty-eight years  and eventually established The Bahamas School for Piano Studies where students were encouraged to prepare for the Associated Board of the Royal Schools of Music (ABRSM) piano exams; she prides herself on the excellent results they were able to obtain. 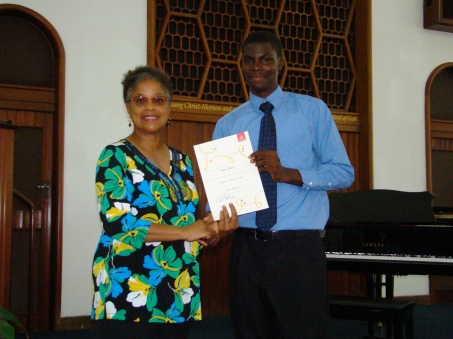 A student of Ms. Fawkes being recognized at the Associated Board of The Royal Schools of Music High Scorers’ Concert, held at St. Andrew’s Presbyterian Kirk, having received distinction in the graded music examinations.

Rosalie Fawkes at her piano in the study of her home at La Campanella. 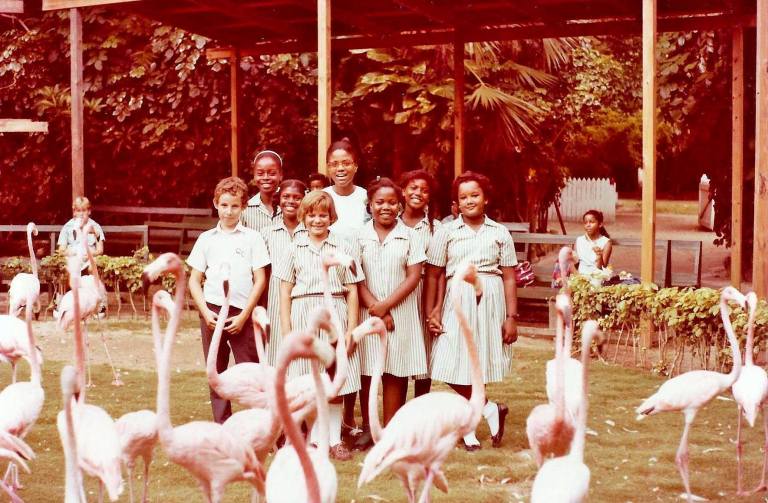 Ms. Fawkes spent 23 years teaching at Queen’s College. She is shown here with students on a field trip at Ardastra Gardens.

Currently she serves as the General Secretary of The Young Women’s Christian Association of The Bahamas (YWCA).  She informed me that she started attending YWCA meetings with her mother in 1960 and in 1986 when Lady Fawkes was invited to return to the Y, she went along with her mother and supported her presidency of which the major initiative was the introduction of the Affordable Housing Program; it is an ongoing and expanding project. 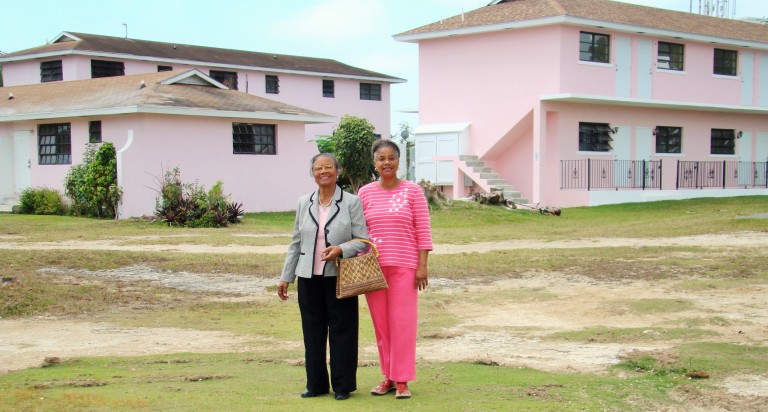 Rosalie and her mother, Jacqueline Lady Fawkes, proudly stand in front of the Affordable Housing Program at the YWCA Dolphin Drive, which was initiated during her mother’s presidency.

Growing up on McPherson Street

But before those days was McPherson Street, Over-The-Hill. Ms. Fawkes remembers it fondly.

“We lived in a different Nassau. It was safe. You could play in the road and with carefree abandon ride on your bicycle from Market Street to Blue Hill Road. People were happy,” she said.

Today, the neighbourhood Ms. Fawkes grew up in bears no resemblance to what it was back in the day.  She laments the unaesthetic, commercial buildings, abandoned and poorly maintained properties, and the general neglect.

Nevertheless, Ms. Fawkes has wonderful memories of her days Over-The-Hill.

A major delight for her during childhood was walking every day to the Southern Public Library on Blue Hill Road.  She had an insatiable appetite for reading, often getting through a book in one day. She also loved to go to Purity Bakery, Market Street, where she would buy pineapple tarts, muffins and cookies, which were among the favourites served by the popular Miss Tiny.

Saturdays were theatre days – a day when Ms. Fawkes would frequent the Capitol Theatre on Market Street accompanied by her father and siblings, and through the years, both parents without fail drove them back and forth to piano lessons.

Meanwhile, Sir Randol was busy fighting for the rights of the people.

Ms. Fawkes’ earliest recollection of anything untoward in her father’s life happened when she was five years old.

“My mother claims that 1958 was one of the worst years in her life and the only childhood recollections that I have of politics all occurred in 1958. It was the year of the general strike; later, an arrest and a charge of trespassing was brought forth, and finally there was the sedition trial. For a reason unknown at the time, I was abruptly removed from Cathedral Grammar School and sent to a non–fee paying school.   There was no preparation nor explanation and I remember feeling alone and in a dark place,” recalled Ms. Fawkes.

“In later years when I questioned my mother as to why I was sent to another school, she told me that my father was being tried for sedition and that the family’s income had dried up.  Again in 1958, after the general strike, I remember feeling profoundly sad when my parents went to New York to solicit help for the struggle and I was left with my grandparents.  I would sit on the front door step of their home and look up into the sky and if per chance a plane flew overhead, I would ask if my parents were on the plane,” she disclosed. 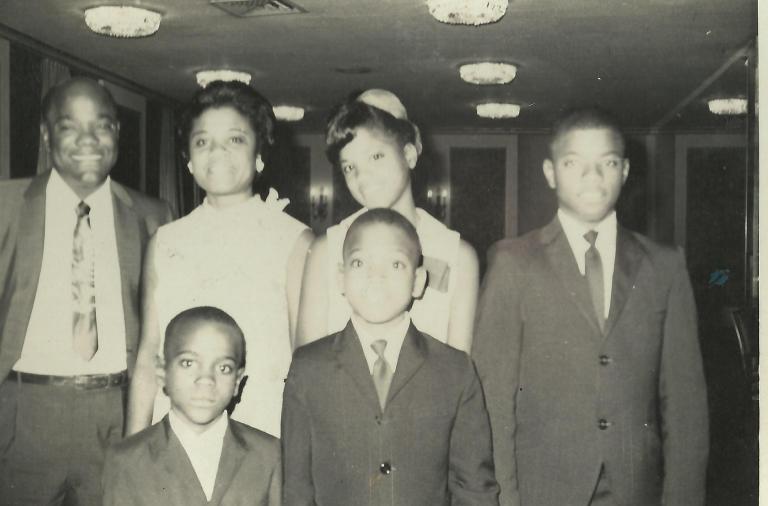 The family of Sir Randol accompany him to New York in 1967 during a time he was urging  Bahamians living abroad to return  home to build the new nation. In front from left to right are Sir Randol’s youngest children David and Douglas. To the rear are Sir Randol, Jacqueline Lady Fawkes, Rosalie and Francis.

Since Sir Randol’s death in 2000, Ms. Fawkes has been busy with legacy work, a calling she claimed came with no warning or preparation.

“After his death, I witnessed successive governments try to wipe him out of history and to attribute his accomplishments to others.  I was simply stunned at these blatant efforts to revise history.  After engaging in talks with family members, we knew that we had the documentation and the capacity to counteract the damage that was being done to his legacy.  Sir Randol, before he died, realized too what the politicians were trying to do and throughout his life, he had carefully documented his contributions to the nation and he wrote his books. In 2009 www.sirrandolfawkes.com was birthed and we started to mount the evidence and put it into the public domain,” she said.

“Other people  saw too what was happening, and trade unionists, school teachers, media personalities and community activists banded together with the family and agitated for the government to give Sir Randol the recognition that he deserved.  In April 2013, our efforts bore fruit and the Progressive Liberal Party government renamed Labour Day to Randol Fawkes Labour Day. Today Sir Randol shares in three national holidays including Sir Randol Fawkes Labour Day, National Heroes Day and Majority Rule Day.  I mention that fact not to brag, but as a testament to the power of God Almighty,” said the champion of Sir Randol’s legacy.

Ms. Fawkes noted that when her father passed away, she instinctively knew someone had to continue the work.

“Nary a word was uttered as to what would happen after death.  I’ve been sorting through his papers for 18 years; the work is enormous. You have to study it, catalogue, digitize it and mount it on to the website,” she stated.

A week after our chat, as I thought of my former English teacher, I admired her humility. She is the daughter of someone I consider to be a mover and shaker of our nation. Yet, she does not flaunt that fact. She said that as fate would have it, she is really upholding two legacies: that of her father, in addition to her mother’s work with the YWCA.

“This is now the path that God will have me to travel,” she concluded.