“We grew up when East Street was everything in politics. We grew up during a progressive movement…”

“Just sitting on the porch, talking old story is good for me. I’m like old people. And everyone is, ‘My good cousin!’”

The authenticity of that comment is pure Vaughn Albury.  He’s a down to earth, full-of-life person with a pride for his roots. It runs deep. Although his grandparents, Alphonso and Gertrude Johnson-Archer have passed on, Vaughn still visits family at the over the hill homestead. He is unapologetic about his heritage.

“My grandparents lived across the street from Big One on East Street. I am the sixth child of Carl and Agnes Archer-Albury of Lewis Street, but East Street is our bosom home. We proud East Street people,” he exclaimed.

“When people describe East Street as the ghetto, I refuse to accept it,” said Vaughn, whose parents left over the hill when he was age six.

I met this ‘East Street boy’ back in 1994 when I was a journalism intern at the Broadcasting Corporation of The Bahamas (ZNS). He was like the Energizer bunny. I’ve never seen him looking downtrodden. He was certainly the life of the team. I got the opportunity to work with him officially when I became an employee of the broadcasting station back in 2000. And the same Vaughn I left was the same Vaughn I met upon return – a man full of vitality: often joking, dancing, loud and bouncing in and out of the newsroom..

You’ve probably seen Vaughn on ZNS News or heard him on the radio. He is presently one of the Deputy News Directors, but one who has to still get out of the station and go where the people are. He is not the behind-the-desk, stuck in the office, simply giving orders kind. On the other hand, while reporting, he does not compete with other broadcasters, clamoring for the top political stories; instead, give him a crew and send him to one of our Family Islands. He believes the key to good reporting is not only finding the right subjects, but knowing how to unlock their hidden stories. As the Producer of ZNS’ Island Life, Vaughn enjoys those stories that remind us of who we are as a people and our commonalities.

Vaughn in Spring Point, Acklins, sitting with 83-year-old Eloise Roker-Hanna, the granddaughter of ‘Jerry Roker,’ of whom the song ‘Can’t find Jerry Roker in town’ was reportedly the subject. 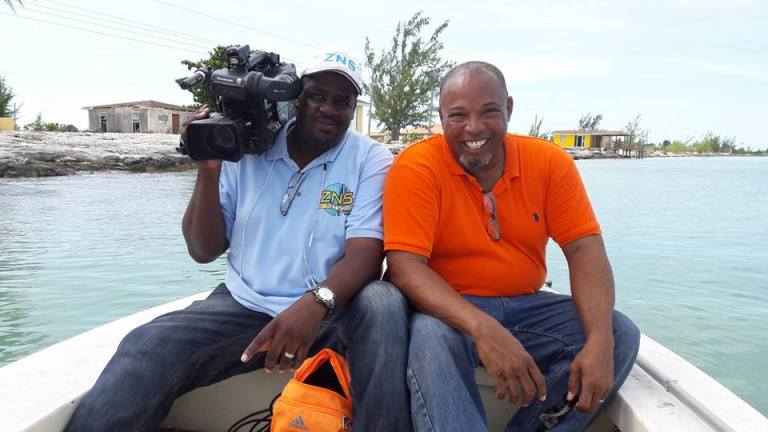 Vaughn (r) looking sun burnt and with a wide grin, is accompanied by ZNS cameraman Quincy Jones as they prepare to leave Acklins for Crooked Island back in October 2016 after hurricane Matthew.

“The Bahamas is a beautiful place. We have some of the most beautiful people on our Family Islands. They are resilient, especially after a hurricane,” said the broadcaster, who is usually riding out a hurricane on an island that is being battered.

“It was heaven because we had neighbours we always interacted with: the Thompsons, the Darvilles, Ms. Suzy, the Dorsettes, the Williams and others.  We knew all of our neighbours and we felt safe. We would go to church in the morning, eat dinner, go back to Sunday School at St. Agnes Anglican Church for 3 pm and then walk to our grandparents. There were no fights. And we never felt poor because we were never hungry. My grandparents had a restaurant. We always had a meal,” he said.

“A lot of the areas over the hill are now occupied by foreign nationals who might not have the same attachment to the place called East Street. It’s that special place,” he said with pride.

Vaughn feels that for the seven Albury children, growing up Over-The-Hill was a front row seat to the making of something major.

“We grew up when East Street was everything in politics. We grew up during a progressive movement when there were a lot of rallies on the Southern Recreation Grounds, Windsor Park and others on Clifford Park. I felt privileged to be a part of that. At those rallies were people like the late Sir Randol Fawkes, Sir Lynden Pindling, Sir Cecil Wallace-Whitfield,” he reminisced. 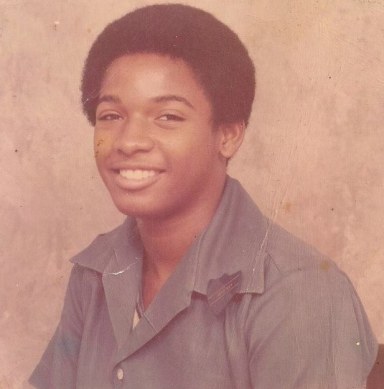 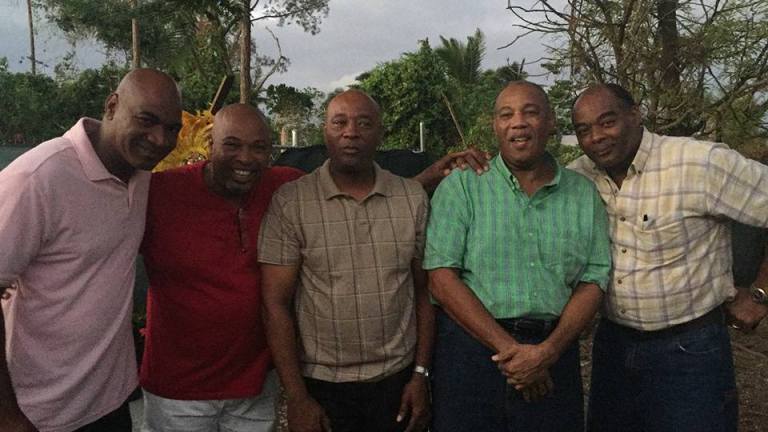 Vaughn and a few of his siblings

Vaughn went on to graduate from Government High School in 1976 as Head Boy. The first time he was on radio was as a guest of Charles Carter who is a veteran, respected broadcaster today. News Director, Calsey Johnson later offered Vaughn a job, but being only 16, he was considered too young, resulting in his time at ZNS lasting only two weeks before he went on to work for the National Insurance Board for a year. By the time Vaughn returned to ZNS in 1977, it was just one week after television started in The Bahamas. Certainly, he has been in the trenches as broadcasting has evolved over the decades.

As a go-getter, Vaughn aspired for higher and enrolled in Syracuse University in New York, graduating with a Bachelor’s degree in International Relations in 1984. Since November 1st of that year, he has had continuous employment with ZNS, known as ‘The National Voice of The Bahamas.’ He has held numerous positions, including but not limited to Film Editor, Video Switcher, Script Assistant and Director, having charted the course of live church services, independence celebrations, news, junkanoo etc.

When Vaughn is not at work, attending his beloved Holy Trinity Anglican Church or sitting on the East Street homestead porch, he is cooking – he absolutely loves this and actually caters –  dancing or simply spending time with his beloved wife of 31 years, Vonya, youngest daughter  Shari and eldest daughter Ryan and her family.

“I am a happy person. I am a person who realizes I can’t waste time on negativity. Life is too short. And like my uncle used to say, ‘East dessert first!” he said laughing. 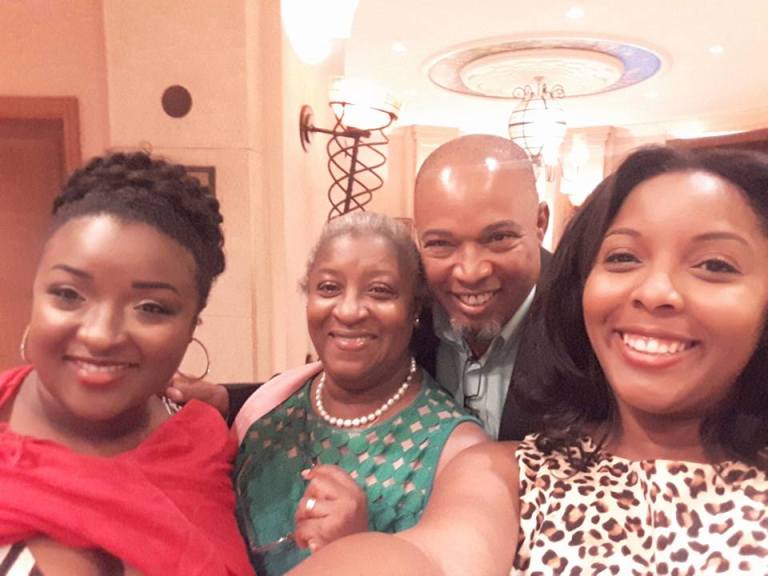 Questioned as to what he would say to those who presently live Over-The-Hill, but seemingly use present conditions as a crutch for not aiming higher in life, Vaughn said, “Your circumstances do not define you. Have a goal. Be passionate about it and determined to overcome the odds. We have a goodly and godly inheritance. Embrace it.”